"We Deliver" Keeping Your Clients Message in Mind 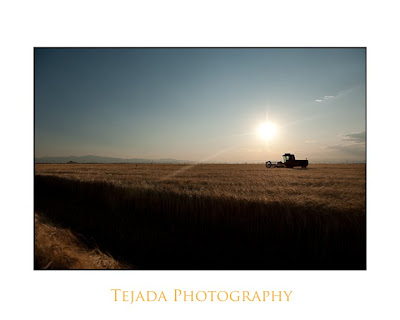 While on assignment in the San Luis Valley as noted on the previous post, I also shot several agricultural subjects for my client. I received a comp of this years annual report from the design firm prior to starting this assignment. Through phone conversations as well as having the comp in hand, I knew that the theme for this years annual was based around the phrase "We Deliver".

After Erik and I scouted the solar plant for locations to shoot the portraits shown on the previous post we when shooting farming activity until sundown. When shooting for an annual report, it is very important to keep focused on the message that the designer and client are addressing in the message of the annual report.

When shooting a framing activity like a combine in a wheat field, I would normally try to avoid "ugly" power lines in the photo. However, those "ugly" power lines are my clients lines and they mean money to them. It is my job as a photographer and yours, to keep your clients interests in mind while at the same time, create beautiful photography that both you and your client would be proud to display.

As the sun started it's journey further to the west we found this lone combine working in a field of wheat. The combine was not under my control for these images, this was simply a chance happening that we found this activity taking place.

We drove up to the side of the field looking for angles that would allow us the opportunity to put power lines and a small sub station at the south end of the field in the photo. All the images contained in this post are the same location, same combine. My first choice of course, would have been to have complete control over the movement of the combine. Prior arrangements and a walkie talkie would have been nice. We had to wait for the normal movement of the combine, working it's way to the north then west and again back south. The cycle took about 8 or 10 minutes for each opportunity to photograph the combine. I had a total of about 3 passes to create the images you see here. 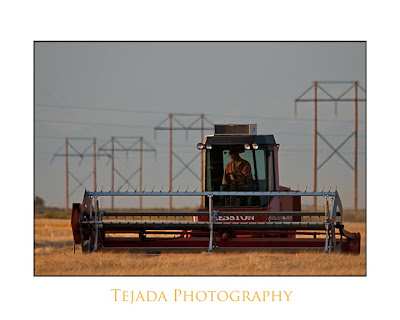 Ain't those power lines purdy? How about these below! 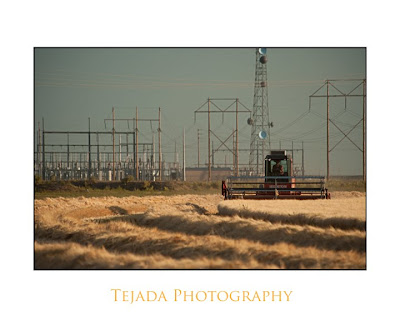 I was concentrating mostly on the southern view, as it allowed me to include more power lines for the client. After 2 relatively close passes, the combine operator stopped his combine to talk with us. He was curious about what we were doing, we introduced ourselves and I told him I was photographing for the coop. As I stood there talking with him the light was edging ever closer to the horizon. I noticed that the sky and light looking north was quickly becoming beautiful and I asked if he would mind jumping back in his combine and continue driving north.

Clouds in the valley started becoming more prominent in the north and I was able to capture the following image as he drove off. 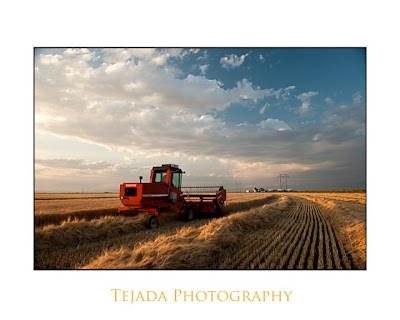 I happened to be wearing shorts this day and I found myself running waist high in the wheat in order to position myself for several of the shots. I keep asking Erik if there was such a thing as a "wheat snake" and weather or not I needed to hurry about any other type critters I the field. This turned out to be a mistake, Erik took this opportunity to scare the crap out of me with all sorts of descriptive creatures I needed to look out for.

We also managed to shoot a little video on this portion of the shoot in the San Luis Valley. I really like shooting agriculture subject matter, I hope to shoot more before the season is out.

great work. normally the power lines would be a distraction but it the context of your assignment they fit in perfectly.

All are great pictures....
And nice to see all of your Youtube movies.

Now you're talking! Since my life has revolved around agricultural machinery, naturally I'm drawn to photographing machines in action. My photography experience is limited so I'm always looking for examples of how to deal with situations. Thank you.

I do have a minor quibble, and it's really just an aside, as it doesn't matter to your message. This is an example of where having a fact checker can really help. The machine you saw normally isn't called a combine or "wheat thresher"! Some call it a windrower, and some call it a swather.

Anyway, thanks for showing how you go about doing your work. I love work. I could watch others do it all the time!

Really great series! You said this basically target of opportunity, did you ever talk to the person running the thrasher? Did they seem to mind you shooting them or did they just ignore you?

thanks for keeping them posts coming!

I noticed in the video you use the original straps on your camera's and when using 2 camera's they tend to bang into eachother using them straps...
I started using R-straps (by BlackRapid) some time back and boy; do I like that system!

My camera's don't bump eachother any more when I carry 2 of them (1 on each hip).

Neat too is that you can kinda "sling" the camera to your eye very quickly... and back.

wel: I simply wouldn't leave the house without it ;^)