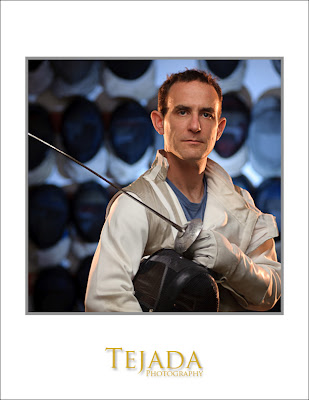 In part 1 of my fencing shoot, we combines a small amount of ambient light with a single flash with a grid. With this photo, I killed the ambient light choosing instead to light the entire scene with strobes. I used a much softer quality light on my subject, opting for a overhead softbox. I positioned my subject in front of a wall rack full of fencing masks, the repetitive pattern of the masks made for a nice background.

For this series of photos I untimely ended up using 4 Nikon SB-800 strobes. The strobes all fired using the Nikon CLS system. My key light is a single SB inside a FourSquare™ the strobe was set to group A and boomed overhead. A used a Quantum Turbo SC battery to power the strobe.

For the rim or kicker lights, I had two SB-800's, each with a full cut CTO (color temperature orange) gel on the flash head. I used a set of barndoors on each strobe to control the spread of light and help prevent flare in my lens. I assigned both strobes to group B as they had the same distance to travel and both strobes received the same amount of power. Just as a side note: All strobes assigned to a particular group in this case group B, will all fire at the same power level. You can not adjust each strobe independently if they are assigned to the same group.

The background flash was an SB-800 with a full cut CTB (color temperature blue) gel on it. A CTB gel converts a tungsten light source to daylight. Since the strobe is already a "daylight" balanced light source, the gel raises the kelvin temperature which has a cooling affect on the light. The flash head was zoomed to 50mm and place into group C. 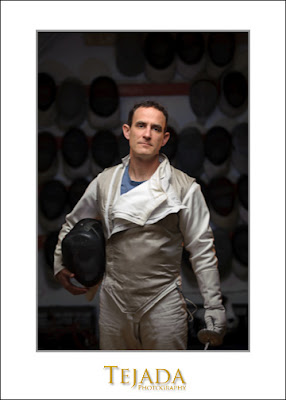 From my camera position and using the SU-800 commander, I was able to shut off the various groups to show the build of lights. In the following series of photos you can see the progression of adding lights on the subject. The first with just the key light, the second with the addition of kickers, and the third with all strobes firing including the background.

Here I'm fitting one of the rear kicker strobes with a barndoor. These are really inexpensive modifiers and I use them a lot. They cost about $10.00 each. 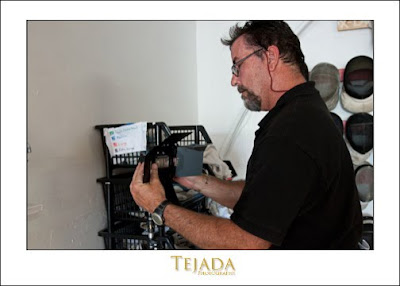 You may have notice that I make no mention about what power settings I'm using. Personally I don't care, I make a creative choice to shoot at certain aperture and than adjust the power on the strobes to fit that. I wanted a shallow DOF to soften the background, that happened to be f/2.8.My son Chris shot some video during the shoot, it shows the photographing of both part 1 and part 2 of these posts.

Great stuff David!! I love the images from the video with the blue wall.

I find the 'build-up' process infinitely more intriguing and educational than simply saying "This was shot at 100iso|f/5.6|250th".

Thank you for such awesome presentation and write-ups of your projects, David! I would still love to attend one of your workshops someday. :-)

I heard you mention on your interview for This Week in Photography that you once used a high speed sync feature for your flash using Radio Poppers for a job on a Nuclear construction site.

I've heard that that only works with a special combo of bodies and flashes. Can I ask what body and flash you were using to get it to fire at such a high speed like that?

Great video!! Thanks for posting it. What boom arm and stand do you use with your FourSquare softbox?