This is another project for myself similar to the archer I did several weeks ago. I contacted a local fencing school in Denver, and asked if it was possible to photograph at their facility. I was granted permission and did so this past weekend. I was hoping that the owner would also model for me, however, he suggested another individual that he thought would be perfect.

I had the pleasure to photograph fencing enthusiast and high school teacher John K. We made arrangements to met at the school at 2 PM last Saturday. Normally it would have been full of sword fighting students, except that classes don't start for another week or so. John was kind enough to give me an hour of his time, he keep busy grading papers while I worked out lighting solutions.

I was able to get 3 images in the shot time I was there, the photo at the top of the post is probably my favorite. My son Chris came with me on the shoot, he shot some production stills which I'm including here. 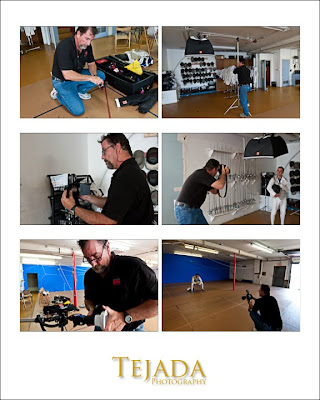 Let's talk about the image at the top of the post first. I used one Nikon SB-800 attached to a Bogen Justin Clamp and fastened to a pipe on the ceiling. I powered the strobe using a Quantum Turbo SC battery. I put a small 30-degree grid on the flash, which provide a concentrated pool of light where my subject sat. The strobe was fired using a Nikon SU-800 commander on top of my D700.

There was an open garage door to the right of my shooting position, which provide the ambient fill in the room. Most of my exposures were at a shutter speed of 1/250, I liked the deep dark mood it created. The following sequence of images show how dragging your shutter and allowing more ambient light into the scene changes the entire mood of the shot.

This series of images running from left to right increase in exposure by one stop increments. The aperture remains the same in each image, only the shutter speed changed. I slowed down or dragged the shutter in order to let more ambient light into the exposure. Remember, shutter speed controls ambient light and aperture controls the flash exposure.

I have a few spaces left for my September 26th Small Strobes, Big Results workshop in Denver. If you would like to learn more about how to achieve studio quality light on location, this workshop is for you. Give me a call or drop me an email if your interested.

In the next post, I'll discuss another image shot during this session, we'll be looking at building a shot using 4 SB-800's, as well as showing you some video. DT
Posted by David Tejada at 6:28 AM

Great Picture David, I like how it has a lot of mood and emotion, definitely looking forward to the videos, and picking up some good tips from you.
Just curious, which carrying case are you using to move your gear? It looks really useful.
Thanks for posting! you always manage to give us some inspiration.

Love your work, this blog is great.