I've been working on an annual report which has the message "We Deliver" as it's theme. I mentioned this project several posts back, the one shooting the agricultural images from the San Luis Valley in Southern Colorado.

The annual report design calls for 4 specific full page spreads at the front of the annual. The size of the annual report is 8 1/2" X 11", and the cover is only about 7 1/2" inches wide. Under the this shortened cover are these 4 specific images each progressively getting larger by a 1/2" inch until the last image reaches the final size of the book of 8 1/2" inches. Here is a pdf of the design to help grasp the idea.

Each of these 4 spreads reveal a half inch of the right side of the image, the graphic designer and I had several discussions regarding how to handle that 1/2" inch reveal. During the design phase of the annual report, the designer had no idea what subject matter was going to make up these first 4 pages. We wanted the revealed area of each photo to be clean, lacking any distracting elements. I didn't want to cut someones face in half in the reveal or some other sort of distracting element, you know what I mean. 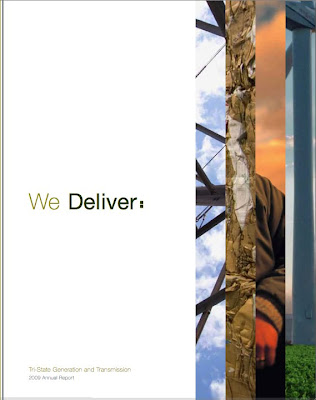 You can see from the example layout above the images that are revealed seem busy. My job is to smooth them out. As you open the cover to the annual, you are still able to view the additional 3 spreads. 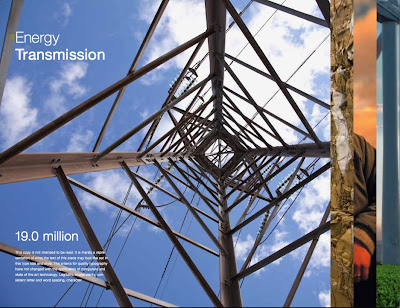 And in the photo below you see the final image of the comp that was provided. 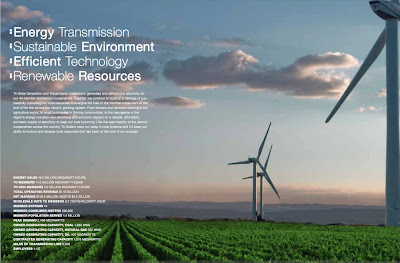 One of the images recently taken and discussed on this blog was the wheat field image. I believe that image, the one shown below will be the last spread of the 4 spread set. I just pasted in the text from the layout to give you the sense of what it would look like. 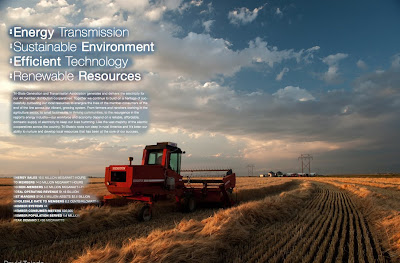 Part of this assignment took us to the small mountain community of Ouray, Colorado. Ouray is also known as the Little Switzerland of America. The town of Ouray recently changed all of it's street lights to LED lights, saving the town thousands of dollars of energy costs. Erik and I flew down to Montrose in the companies private plane and shot both the evening we arrived as well as pre-sunrise. Here is my favorite image from that shoot and how it might look in context. 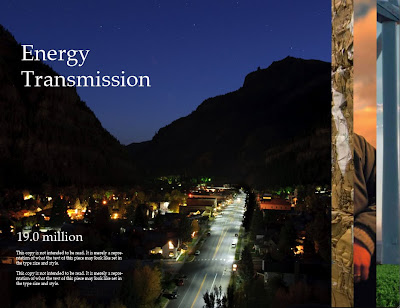 The image below was shot last week in Taos, NM. This is a solar plant that provides power to a school next to the solar plant. I have other shots earlier in the morning I prefer, however, I think the client will opt for the one shown here with people in the photo. The two people in the photo are the local energy CoOp and a representative of the school. 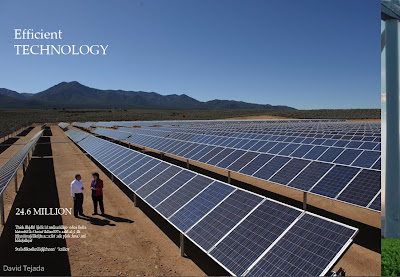 I'm not exactly certain what the final image is going to be, perhaps a stock image I've previously taken at one of their many facilities.

I'll be in NY for the Photo East Expo, if you see me wondering around the floor on Thursday please say hello. DT
Posted by David Tejada at 7:44 AM 3 comments: 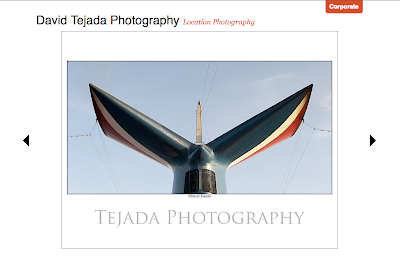 Have you ever tried Parade? I can't remember where I heard about them, pretty cool though. Parade is a really easy way to get your images online. Their designs are clean and the price is right. I use the free one to post special galleries for myself. Here is one I put together showing the photos taken on a family reunion cruise over the 4th of July holiday.

Have a look, it might be something of interest for you.
Posted by David Tejada at 5:14 PM No comments: 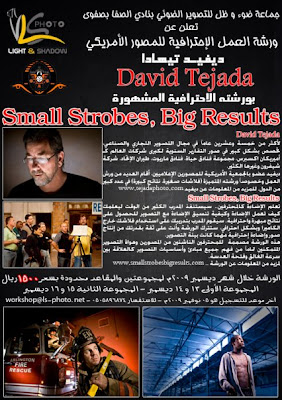 I am very excited to be teaching two very special (2 day) Small Strobes, Big Results workshops in Saudi Arabia Dec 13-16, 2009. My host and friend Abdullah S. Al-Saeed has put this workshop together, for more information regarding it please contact Abdullah HERE.
Posted by David Tejada at 9:00 AM 2 comments:

The Wonders of CLS 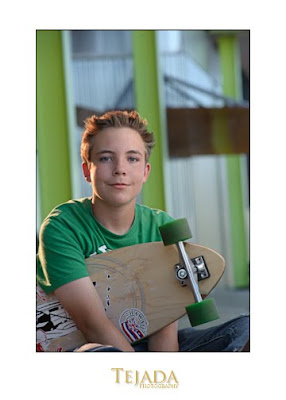 At a recent SSBR workshop here in Denver, I tested the limits of using CLS outdoors in the shade. I was amazed at the distance I was able to use the build in commander on my Nikon D700. I was able to shoot at a final distance of about 60 or 65 feet from the strobes, just amazing. 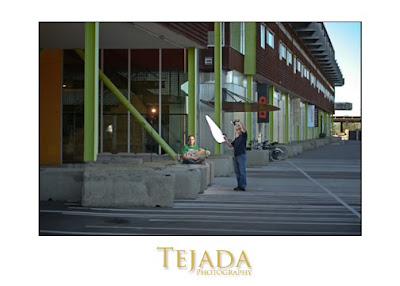 You can see from the image above that I am pretty far from my subject and my lights. Erik is holding a Lastolite Tri-Grip with a one stop diffusion strength. The strobes are Nikon SB-800's they are powered with my Quantum Turbo SC batteries.

Here is another shot we did during the workshop. In this first shot I am establishing my ambient fill light. My white balance (WB) is set to Tungsten, this allows any daylight to shift to the cool spectrum and the scene is under exposed by about 2 stops, this is my fill light. 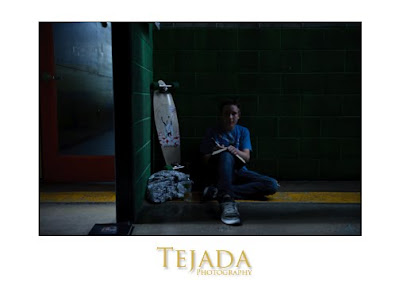 I than had Erik hold an SB-800 with 2 full cut CTO gels on the flash fitted with a grid. The reason for the two full cut CTO's; the first to bring the flash back in balance with the Tungsten WB and the second CTO for the warmth of the light. 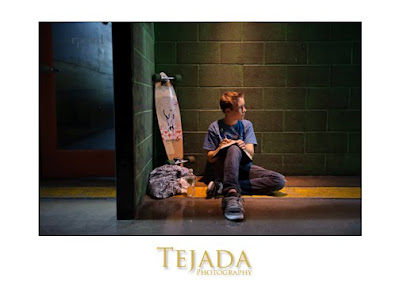 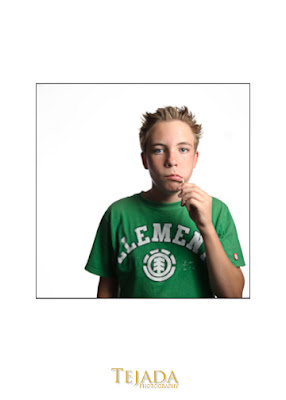 In this photo of Chris, I demonstrated the use of the Orbis Ring Flash. 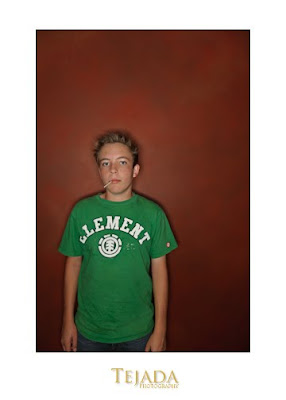 While I'm thinking about the CLS system; For you Nikon users I'll be teaching a two day CLS Small Strobes, Big Results workshop in Downtown Philly for the Nikonians Org. The workshop will be held at the Power Plant Studios on Nov. 3rd & 4th. You will need to contact Nikonians to book a spot for you.

I might also mention that there is still space for the Philadelphia, PA Mentor Series "Master Lighting" Trek at the end of the month. Check the Mentor Series website for details. DT
Posted by David Tejada at 9:24 AM 2 comments: 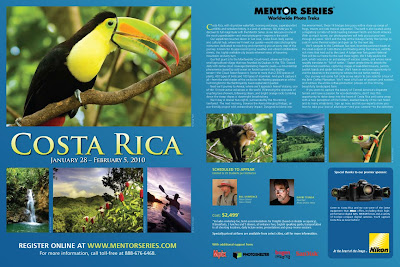 I'm very excited to be included on this one. I've never been to Costa Rica before, it looks like it is going to be a blast. If your looking for a break from the winter cold, join me in Costa Rica!

I'll be joining my friend Bill Durrence on this Trek, he's a great instructor and fun to be around. Of course I'll be bring my strobes, we'll have plenty of time to help each of you to lean how to use them properly.

This will be my 4th Mentor Series Trek, they're a lot of fun and they're very well organized. What a wonderful location and a perfect time of year. I hope you can join me and Bill on this fantastic Trek.
Posted by David Tejada at 3:54 PM 1 comment: 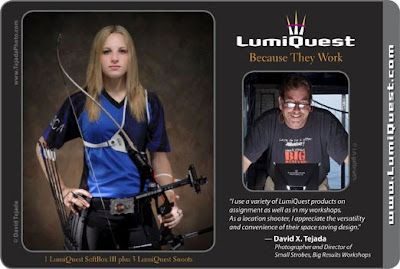 I was recently featured in a LumiQuest Ad which appeared in ShutterBug magazine. I specifically photographed Jessica the archer for this ad. I wrote about this shoot several posts back, you can read about it here. I particularly like their snoots for concentrating and controlling my speed lights.
Posted by David Tejada at 8:36 AM 2 comments: