I received an email from my friend Quest Couch last week, Quest is the CEO of LumiQuest.  LumiQuest as you know, makes all those really cool light modifiers that I and so many of you use on a daily basis.

It has been said that "imitation" is a form of flattery.  I'm all for competition in the market place, it creates innovation and improved products for the consumer.  However, the outright theft of intellectual property by lazy individuals or companies is unethical and illegal.  Doing so, only produces cheap unifier products and stifles innovation.  For me, I'm in support of the "Real McCoy"

Please check out  QuestForRights, and add your comments.

Posted by David Tejada at 10:07 AM No comments: 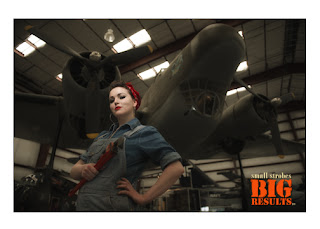 Last month I was in Tucson, AZ teaching a Speedlight workshop Popular Photography Magazines "Mentor Series".  I was teaching along with my friends, Dave Black and Lucas Gilman.  It was the first time that the Mentor Series had offered such a specialize workshop dealing with just lighting with speedlights.

Here is one of the photos I took as a demonstration using just a single grid on an SB-800.  I've ben using the Rogue Grid System for about a year now, I just love it.  The grid comes with 2 different grid sizes, a 25 degree and a 45 degree grid, when both are positioned together you get a 16 degree grid.  If your looking for a cool grid system, check them out, I carry two with me. 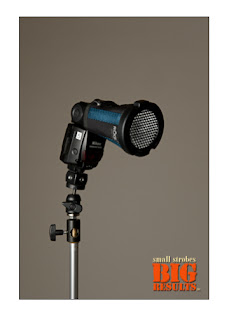 One of our location photographing was the Pima Air & Space Museum southeast of downtown Tucson.  One of the models which showed up was a gal dressed like the cultural icon Rosie the Riveter from the second world war era.

I position her under in front and below an airplane which was fitting for that time period.  The first exposure shown here is what the camera deemed normal. 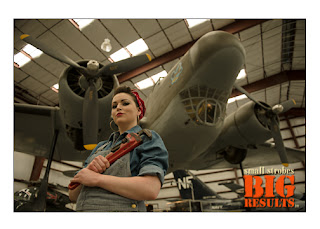 I then deliberately underexposed the next frame by about 1 stop before turning on my flash. 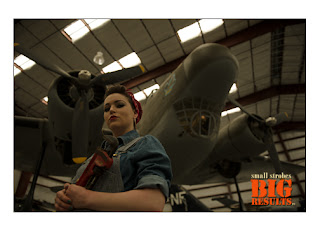 If your interested in learn how to get studio quality light using your speedlights, join me for one of my Small Strobes, Big Results workshop.  I have space still available for my August 18th workshop here in Denver.  For more information about my workshops and how to register click HERE

I might also add that I'll be teaching at the Santa Fe Photographic Workshops August 5-10, 2012.  I'll be teaching a course titled Corporate Photography and the Annual Report. If your interested in learning about the exciting field of corporate work, don't miss this workshop!  For more information regarding enrollment click HERE.
Posted by David Tejada at 6:28 PM No comments:

Back In The Saddle Again

These past 2 months have been crazy for me.  I've been on the road constantly, back and forth to Dubai twice, a two week trip to Ghana as well as Tucson and Salt Lake City.  The way I figure it, I've spent over 107 hours of flight time these past 8 weeks.  I'm slowly getting my legs back under me and re-introducing myself to the family.  I'm looking forward to catching up on blogging and sharing some lighting techniques with you.

Back in March, I was on assignment in the African country of Ghana.  It was my first time visiting Ghana, I found the citizens of Ghana a friendly and proud people. I have never seen so many cell phones in my life, everyone is connected no matter how far out of a city they live.  I was shooting for a mining company doing business there, it was their Ghana division that actually hired me for the photography.

I spent about two weeks shooting, I had a huge shot list, everything from social events to underground mining and helicopter aerials.  Prior to arriving in Ghana, I had spent 10 days in Dubai teaching at the GPP (Gulf Photo Plus), I had 3 days at home before heading back out for my Ghana assignment.  To say the least, I was pooped.


The short video above is a series of individual photos put into iMovie to show you a mining site blast, just one of the fun things to see while shooting for mining companies. 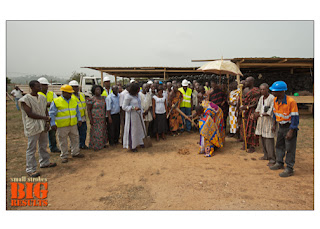 While in Ghana, I was asked to photograph a groundbreaking ceremony for a new hospital in the community nearest the mine site.  The local chief of the area was on hand to swing the pick.  He was escorted by several helpers including his very own "voice activated Umbrella Holder". 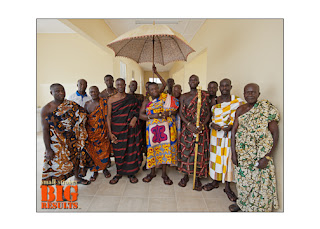 Here is a group shot of the chief with all his friends including his VAUH.  The chief asked me through an interpreter, if I could swing by his palace to photograph him later that evening.  I thought it an honor to have been asked and heck, I wanted to see the palace.

An hour later I was driven to the Chiefs palace... a ranch style home, nicest on the field or lot.  When we arrived at the Chiefs place, the sun was just setting.  Once the Chief was informed of my arrival, we were asked to wait while he dressed into his formal outfit.

His formal chair was located in a large courtyard under a large overhanging roof.  As this opportunity to photograph the Chief was unexpected, I did not have any modifiers with me.  So I took the flashes that I had and bounced them off of a wall in the courtyard.  You can see the two strobes laying on the ground pointed to the wall, I also had one flash on camera directed on the wall as well.  All three flashes were set to full power as I had quite a distance to through the light. 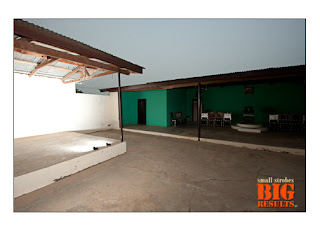 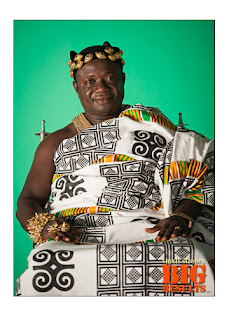 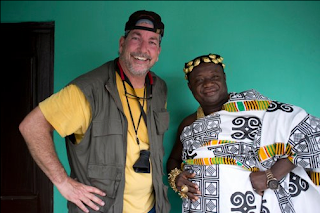 It was a pleasure photographing him, I can honestly say that I had never photographed a Chief before this time.  What a hoot.  DT