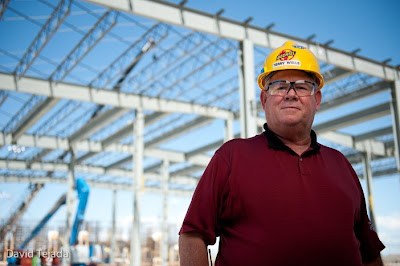 Shortly after returning from my speaking engagement at the UPAA in New York and holding my Buffalo SSBR workshop I shot the above photo. This was the second time I had visited this location in the past 12 months. It is a project that Bechtel is building for the United States government. I posted about my first visit HERE

The gentleman featured above is Terry Wells, Terry has received a special award for safety and his employer wanted a photo of him for their magazine. I arrived in Pueblo, CO on location at about noon, not your best time to be shooting for sure!

I had the same constraints shooting at this location as my previous visit. Being that we are on a military base with chemical weapons and such, I could not show any recognizable details of the location. I found the only spot of shade that had a view of some construction work behind Terry.

I used my new FourSquare™ with 2 SB-800's inside to provide the light. I used high speed sync in order to shorten my DOF. The photo was taken at 1/2000 @f4.5 Without the ability to use high speed sync, I would have been forced to use a much smaller aperture which would have increased my DOF. If I had used an aperture of say f22, I might have included details at our location that the military might have found objectionable.

Just like my last visit, all my images where screened by a special security detail before we left the premises. Here is another image for the shoot. 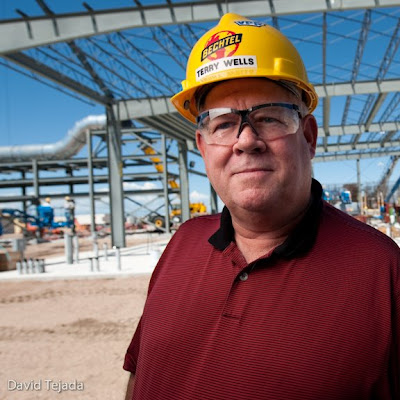 Every time I read your blog I want to spend money. I want the radio poppers and the 4 square your going to kill my bank account if you keep this up.

I love the ability to use High-Speed-Sync to make photos at high noon that give you the deep blues. Did you use the radio poppers on this also??

Why did you use the 4 square with a softbox instead of a white shoot through paraplu. Is there a big difference in lightning. It's sometimes a little bit disapointing that in the Netherlands where I live, things as for instance the radiopoppers en the foursquare are not available. Do you now of it's possible to serve your camera on a distance with the radiopoppers?