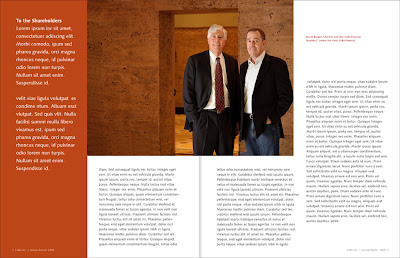 No sooner did I get back from Philadelphia, I received a call for a quick executive portrait for an annual report. The design firm and client wanted these two executive photographed outside with rock or some sort of natural stone around them. Weather dictated that the photograph would be shot inside instead of out. This image needed to be completed and delivered to the printer on Friday.

I was able to scout the location with the two designers working on this annual report the day before the shoot. The only natural stone available to us anywhere within the building where their office are located was between a stairwell and elevator lobby.

Here is the lighting set up for the shot. 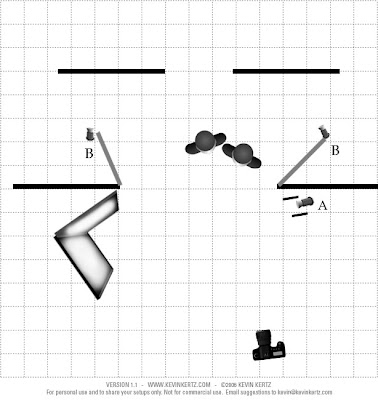 I shot this using 3 SB-800 Nikon strobes using CLS (Creative Lighting System). I was able to control the strobes via the build in command unit on the D700 I was shooting with.

Even though the two strobes used for the background lights (group B) did not have direct line of sight to my position behind the camera, the CLS system worked great. The lights used for the background where bounced into the ceiling and both where fitted with full cuts of CTO in order to provide warmth to the wall behind the subjects. The lighting in the elevator lobby is the available ambient light from tungsten fixtures. The elevator lobby is through the doorway behind the gentlemen on the left

The key light or (main light) was 2 tall panels connected together with a white fabric. I positioned a SB-800 across the doorway where the two subjects where standing and directed the light into the panel system. I placed 2 gobos around the head of this strobe in order to control flare. Just above the subjects heads where 3 small spot lights that where effecting the shot. We used black foil in order to cover the lights during the exposure. There was also 3 florescent light in the hallway which we turned off via turning the tubes in their fixtures. The florescent fixtures would have contaminate the scene with a green color cast if left on while dragging the shutter for the elevator lobby exposure.

Hi david,
great post, thanks for that. Question: why are you shooting into the panel? why not a softbox from the same spot, for example?

Vincent: The panels are larger than any softbox I have. The distance to the subject would have made a large softbox preform as if a medium, thus a harder light. DT

So cool how you changed the entire feel of that location with your lighting. So sweet!

What lens was used for this photo?
Also, was that a custom lens hood?

Thanks for a great "short" tutorial.

This photograph was shot using my 85mm f/1.4, the lens shade is the standard one supplied with the lens. DT

Very nice. Thanks for the details. Which panel system do you prefer?

Great post David I love these behind the scenes ones!
Which panels are they you're using for the v-flats?

Please ask your subjects to take their hands out of their pockets -- it looks so slovenly!