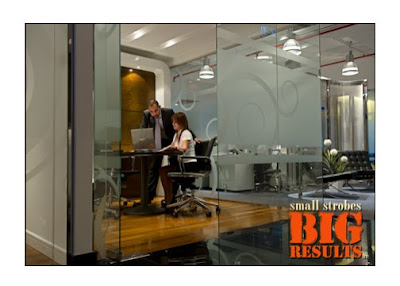 It has been one hell of a month! I've spend the better part of the March on the road. I was teaching at the GPP in Dubai from the 5th of March - 15th and then at the Santa Fe Workshops 20th - 26th. I'm pooped.

The image at the top of this post was one taken during my two day Corporate & Industrial workshop. On the first day, we had access to a nice small internet company in Dubai. We arrived on location at about 4 PM and shot until 8 or 8:30 PM. This was one of the first shots we did when we arrived.

The lighting could not have been more simple. The ambient light was tungsten so the color temp. on the camera was set to that. I needed only a small kiss of light on the subjects faces, I simply placed an SB-800 with a full CTO on the keyboard of the laptop. I placed a white piece of paper to the screen of the computer and I also used the plastic Dome on the flash, the one which comes with the flash.

My workshop had both Nikon and Canon shooters, so I used a Pocket Wizard to fire the flash. I love the corporate shooting done during this workshop, I'll be showing more images in the next several posts.

I might mention that I have an up coming Small Strobes, Big Results workshop here in Denver on the 14th of May. I limit my workshops to only 12 participants allowing more one on one and hands on experience.
Posted by David Tejada at 3:22 PM

Excellent as usual David. Just wanted to let you know how much my work has improved since taking your SSBR class in London last year. Many thanks for your generous input and inspiration. Glad to hear you're busy. All the best,
Graham.