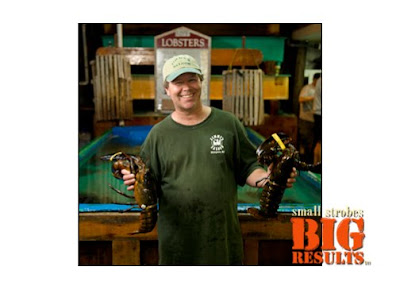 Back in July of this year, I had the opportunity to guide a Mentor Series Trek to Newport, Rhode Island. We had a wonderful trip despite an occasional light rain.

We were walking around downtown Newport shooting the sights when one of those light showers began. Wanting to get out group out of the rain, I noticed a Lobster Company down at the water front and asked if I could bring the group inside to photograph. The folks at Aquidneck Lobster Company could have not been kinder.

We spent about 30 minutes in their facility photographing all the lobsters and the various other details associated with the profession. I took the opportunity to photograph one of their employees holding a pair of lobsters. The lighting was the same as the previous post regarding a simple set-up.

I had one of the Trekkers hold the Lastolite Tri-Grip with a single SB-800 shooting through it. I set the strobe to Remote, placed it on Channel 1, Group A and manually set the power via my built in flash. I placed the ambient first and than lit up the flash.

By the way, I'm head back down to the Santa Fe Workshops for another week of teaching. There are still a couple of spaces available if you have the time or interest. October 12th- 16th. Give the workshops a call if you can make it.
Posted by David Tejada at 12:16 PM

Do you get model releases on the spot for photos like this? i.e. from the employee and/or employer, property release, etc?