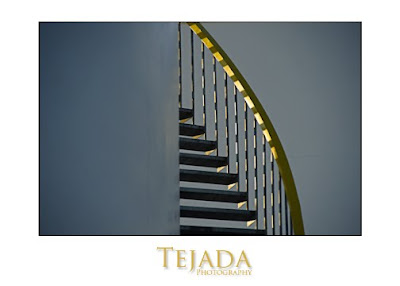 Last week, was a very busy week for me. I had 4 days of assignment work ranging from Agriculture to Health Care and even Oil and Gas subject matter. In today's economy it nice to have a week like that once in a while! In this post, I'll be dealing with the industrial shoot we had.

I was shooting for a returning client based in Oklahoma, I shot an assignment for them several years ago in Grand Junction, Colorado. My assignment last week dealt with a new (very small) crude oil storage facility. This storage facility is located about an hour northeast of Denver. It's the type of facility that allows tanker trucks to drop off loads of crude for future downstream delivery.

The facility has 10 truck bays which allows the tankers pull into and off load their crude. I was commissioned to document the new facility for my client. I had several problems to deal with on this assignment, sun placement was just one of them. With location work, you never know what you're going to find until you arrive on location. The morning I arrived at the location was the first time I was able to put my eye on it. 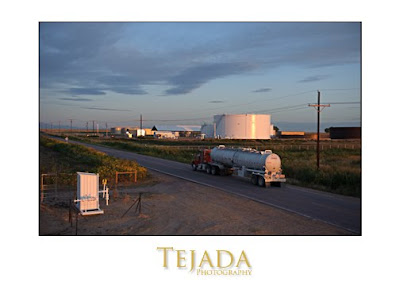 This first thing that struck me when I arrived, was the relatively small size of the plant. It's my job of course to make it look really big and cool. We had a beautiful sunrise the morning of the shoot. I managed to get a few shots of tankers arriving at the plant with the early morning light.

The client informed me that the busiest time for the tanker activity was between 11 AM and 2 PM., not the best time of the day for shooting. Because this facility is all about storage, showing storage tanks and tanker trucks in a photo together makes sense. A shooting position that allowed a view of both together meant shooting straight into the sun. All the trucks pull in facing the storage tanks allowing me only a rear end view of the trucks.

I also had clean new storage tanks to play with, stairs winding around the tanks with smooth lines of composition. With the use of walkie talkies am able to position my subject (Erik) where I need him in the photograph. Walkie talkies are my most favorite piece of non-photographic equipment. 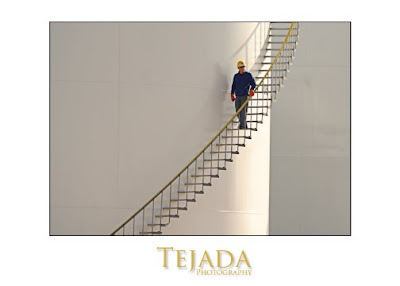 By late morning, a few workers had shown up for work. Contractors where there to finish wrapping some thermal insulation around exposed pipes. The location where the work was being conducted was in the shade. Behind the work were sunlit storage tanks which I wanted to include in the photo. The only way for us to bring detail into the shaded work was to pour some light of the activity. We put together a SB-800 with a Quantum Turbo SC to power it, I just love this battery. The tanks in the background were very bright, my exposure was 1/250th @ f/10.0.

I had Erik put the Turbo SC in his pocket and handhold the SB-800 out of frame on the right side. At such a steep f-stop f/10 I was using full power on the strobe. I fired the strobe using my Radio Popper PX system, which allowed me full control of my flash in bright sunlight and great distance. I wanted the light from the strobe to come from the same direction as the sun, which was lighting the tanks in the background. 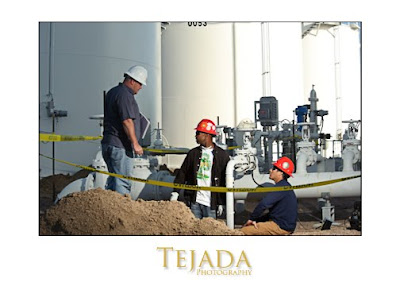 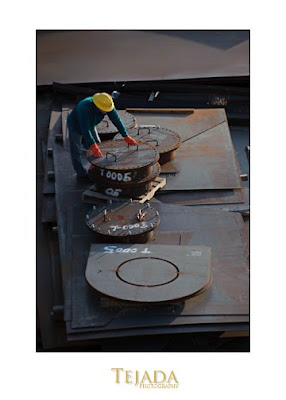 We did manage to shoot a little video on this assignment, you can see some of the antics here.

Excellent as usual. And about time too! :)

Look forward to the other vids in the making.

Glad to hear you're having a good run with the gigs recently! It's always nice when the roller coaster comes back up in our favor. :-)

Great little vid - it was neat to see another photog/assistant's POV when working with you. I love that you kept the last few seconds in there.

Cool video, but it look like Eric's surly when he has to be awake before lunchtime .....

Good to see you're getting the work coming in tho. Bodes well :o)

Great, thanks for directing me to the final pics. I think you got some really great shots, especially considering the subject matter.