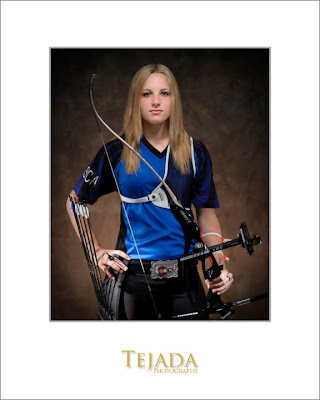 There are times when you just have to shoot for yourself. I phoned a local archery center and asked if I could photography at their center. I wanted to photograph an archer and possibly some action shoots of target shooting.

The gentlemen I spoke with on the phone (Glen), was a wonderful guy and was very helpful finding someone that I could photograph. Glen told me about a young lady named Jessica who happens to be 4th in the world in her class or division. Not only is she a true champion, it was a real plus to have such an attractive subject to photograph.

We spent about 3 hours shooting Jessica at the archery center, we where able to create several lighting setups during that time. The photo at the top of this post was shot using 4 Nikon SB-800 strobes. The key light was a LumiQuest Softbox III powered with an older Quantum Turbo battery that I have in my arsenal. The key light was boomed overhead and the light striking Jessica's face was from the feathered edge of the light.

I had 2 additional strobes snooted with LumiQuest snoots, these are easy snoots to use and they fold flat for easy packing. These strobes where placed on either side of Jessica in order to put pools of light on her hands and equipment. The last strobe was placed behind and to the right of Jessica as a background light. That strobe had a full cut CTO gel over the head of the strobe in order to warm up the light on the background. 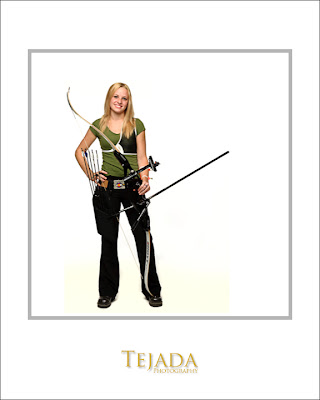 I also brought alone a roll of white seamless paper to photograph her on. The key light on this shot was a single SB-800 inside a FourSquare™ and triggered using a Radio Popper. I used two SB's to light the background, your background should be about 1 1/2 stops brighter than the subject. Since I do not use a meter any more, I use my highlight detection (blinkies) on my LCD screen on the camera to determine the value of the white. 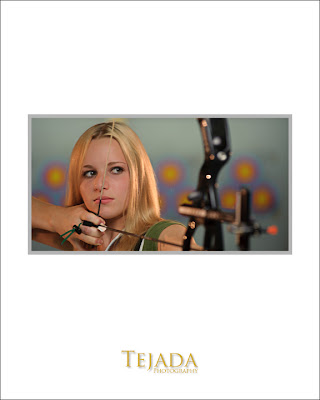 On the above photo, I used my 5 foot Octabox on a boom over head for the key light and 2 SB-800' s with full CTO gels on them used as kickers. The background was lit using the existing light provided by daylight florescent lighting. I have a few more projects I'm trying to power through and I'll be sharing those with you as they are produced.
Posted by David Tejada at 7:45 AM

Great set of images David, thanks for the details on the set up too.

You said "I do not use a meter any more, I use my highlight detection (blinkies) on my LCD screen on the camera to determine the value of the white"

Can you elaborate on this a little? Meaning how do you use the "blinkies" to determine white value?

As always, fabulous work. I use both my meter and my blinkies. Just too old school to put that meter down. Besides, it cost too much! ;-)

Great stuff, and thanks for being so generous with your knowledge and experience.

David, the shots are wonderfully lit, especially if you consider that these are location shots. And you are quite right to do some personal stuff, something I haven't been doing for quite a while.

Hi David, i'm a young italian photographer. Here there are not many professional photographers who wants to help us like me. Your blog is a way to know how to develop this work and a site where study photographic technics. Thx a lot David.

Very nice! I have been following for a while now and have been using a few of the techniques you have shown us. Thanks for the great blog!

I don't do anything remotely resembling commercial work but I find your stuff to be incredible!