Justin Clamp To The Rescue 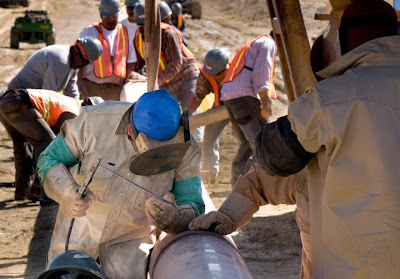 Working on that pipeline job last week provided some tough shooting in mid day sunlight. The welding crew work under a blue canopy along side a tracker which carried the juice to run the welders. This was our first day on site and the welding crew was shut down after just a few minutes of shooting. The welding crew was working without a supervisor on site and because of that, they had to stop working.
Apparently, their where a few welders being trained and the on site supervisor was conducting the training. Who knows, I managed to get a few shots before the work ended.
You can see from the photo below, I have clamped a Nikon SB-800 using a Justin Clamp to the overhead canopy. I was firing this strobe using the CLS method. 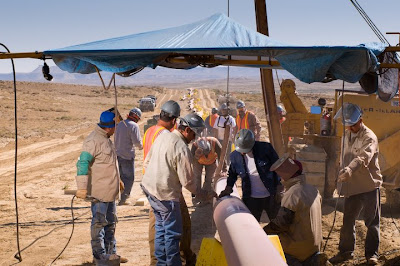 By fastening the strobe to the canopy, my flash to subject distance remains the same as the crew move down the pipeline. This set up provided consistent flash exposures shot to shot, it also allowed me the opportunity to concentrate on composition instead of worrying about changing flash exposure.

It was brought to my attention by blog reader Pierre that the Exif data on the top photo shows that the flash did not fire.

How right he is. I rarely look at the Exif data of my photos. When shooting several shots in sequence it is not unlikely that strobes will misfire or do not recycle fast enough thus producing weak results.

Assuming the strobe fired on all shots with some weaker than others, I processed all the images where the composition worked best not paying attention weather the strobe actually fired or not.

When I return from Detroit, I will look at my files and indeed upload one where the strobe did fire.

Thanks for pointing this out to me Pierre. I want to be very actuate with the images I post on this blog and by no means intend to mislead or misrepresent technique.

You can also see that when editing images for clients, it's all about the composition and image quality. Weather a flash fires weakly or not at all matters not. What matters is the final image delivered to your client. DT