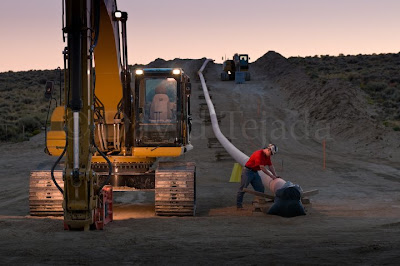 This photograph was taken on my recent trip to Wyoming shooting pipeline work around the Green River & Rock Springs area. Work crews cut out early on the pipeline, anywhere around 4 or 5 PM. During the summer months, this leaves plenty of good light with no workers to photograph.
Before a particular trenching crew took off for the day, I asked to have a backhoe positioned close to the string of pipe. The operator of the backhoe showed us how to turn on the lights on the rig if we wanted them on. Of course we want them on, can we also take it out for a spin?
I order to light this photograph, I placed a Nikon SB-800 in the cab of the backhoe using a Justin Clamp. I placed the strobe above the visor with the diffusion dome attached, and I fired the strobe with a PocketWizard. You can see that the strobe in the cab not only lights the interior, it also provide some nice light on Erik. I positioned the cab door open in order to allow the light to reach Erik on the ground.
Here is the first shot in this series. You will notice as I did, how lifeless the outside front of the backhoe looks without light on it. In order to put more interest in the photo, I positioned a second strobe on the outside of the backhoe to light the front of the cab. 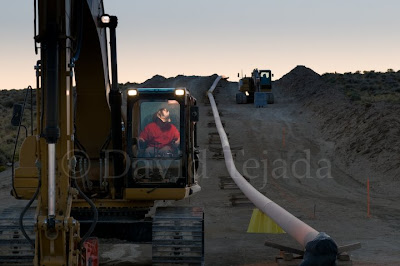 The second strobe, another Nikon SB-800 attached to a Justin Clamp was positioned on the backside of the bucket in order to provide light to the outside of the backhoe. This strobe was also fired via PocketWizard. The diffusion dome was removed and the wide angle plastic extender was placed over the lens of the strobe. 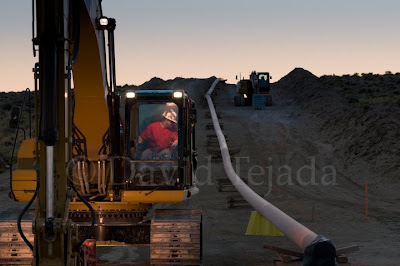 Subject driven lighting is a believable light, one that does not draw attention to the photographers hand. I'm not going for that "Hey, look at my light" style of photography, it's more about "creating light" that's believable.
Posted by David Tejada at 8:05 PM

With respect to "subject-driven lighting," that Heisler week is definitely rubbing off on you...

David,
Nice look! Actually the exterior light is even more believable as lots of "hoes" have lights on their arms so the operator can have light where they are working.
I do like the second (Eric outside) look better too.