Making Time For Yourself 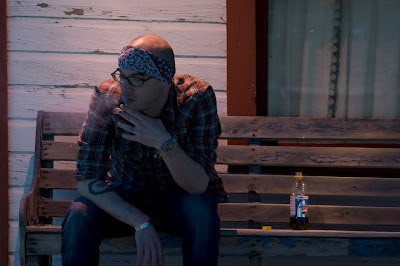 It's really important to make time for yourself to shoot and practice your craft. While heading up to Scottsbluff, NE. for an assignment to shoot some health care images for a client of mine, I decided to stop and shoot for myself. We stopped in a small town in Nebraska while driving to Scottsbluff that had this interesting porch and bench. I thought it would be fun to take 15 minutes out of your drive to make this photograph.
I thought I could use this setting to create a photograph that looked as if it had been photographed late at night. The porch was in full open shade, which allowed me to create the mood of late night. I set my camera white balance to tungsten so that I could get a slight blue bias in the shadow area's of the image that included ambient light. In this case, the ambient light would be serving as my fill light.
I placed a Nikon SB-800 on a Justin Clamp over the subject gelled with 2 full CTO (Color Temperature Orange) gels over the flash head. The reason for using 2 full CTO's is because if I had only used one, the light coming from the strobe would not have the warmth I wanted. One CTO would have rendered the light as appearing neutral or balanced for tungsten. By adding the second or additional CTO, I was able to achieve the warmth of a tungsten light overhead.
The second Nikon SB-800 strobe was placed on a stand and gridded to only illuminate the back of the bench and soda bottle. This strobe was also gelled with 2 full CTO gels for the reason stated above. 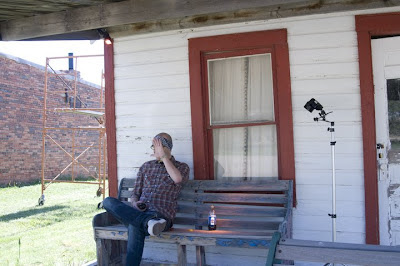 Here is the video we shot while making this photo. I have 17 other videos posted at YouTube that you might find interesting as well. My lighting workshop "Small Strobes, Big Results" are filling fast. I have a few more openings for the August 2nd and August 23rd workshop in Denver if your interested in attending.
Posted by David Tejada at 3:18 PM

thanx a lot for sharing this! :)

The grid I use for the SB is fashioned out of a manufactured grid designed to fit on a Novatron snoot.

Greate stuff.... Thanks for teaching us, I would like to ask you what you have on your hand (showing in video),
when you look the image on back of you camera LCD?

I'm using a magnifier (Lupe) to see the image in the bright sun.