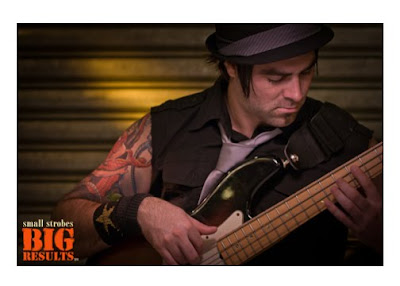 Back in August of 2011, I was teaching at the Long Island Photo Workshops. This is one of the many photos I took as demonstrations during the week. This was a three light setup with an additional bounce.

Let's take a look at the setup below to see how this shot was created. 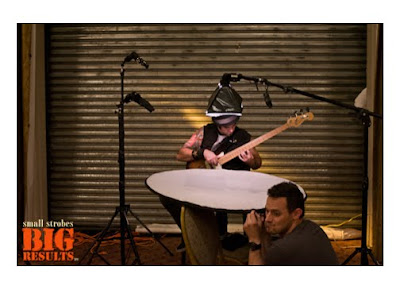 As I mentioned, I used a total of 3 Speedlights for this photograph. The main or key was placed on a boom and the modifier is a Lumiquest Softbox LTp. I had my assistant Benny hold a 42" reflector to bounce additional light under the brim of the musicians hat. The other two Speedlights were wrapped with cinefoil or black wrap. The rear light was fitted with a full CTO and directed on the garage door just above the shoulder. This light not only adds some color to the image, but also acts as a separation light. The other Speedlight was directed to the tattoo on the arm.

Here is another photo from that same session. 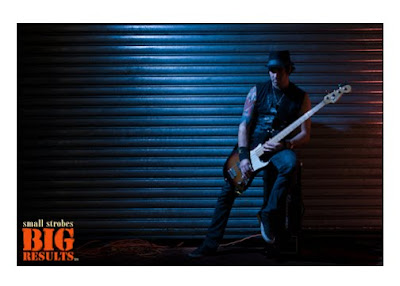 Two Speedlights used here for this shot. On the left (Key Light) a straight hard light with no gel on the flash. I get a blue cast from this light because my white balance is set to Tungsten or Incandescent. On the right, another Speedlight place on the ground with a double CTO on the flash. A very cool shot with such little gear. Here is the setup shot for you to review. 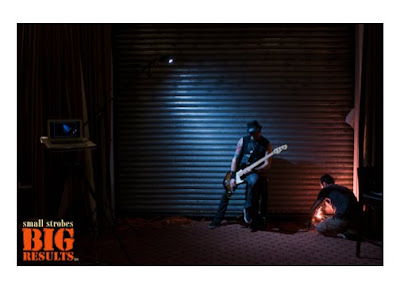 By the way, if you would like to see a complete list of light gear it use you can see my public wish list at B&H HERE.
Posted by David Tejada at 3:29 PM

Amazing results with indeed nicely small setups, thanks for sharing!

lovely outputs!!
thanks for being so open with the sharing...